Living inside a wildlife reserve, this community embraces … 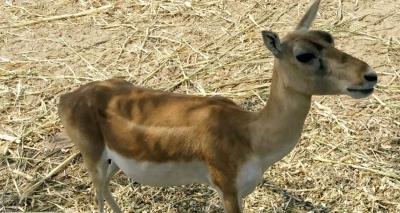 Abohar, October 4 (IANS / 101Reporters) A careless traveler, coming from Rajasthan and entering Punjab through the town of Abohar in the Fazilka district, might completely miss the fact that he is passing through a wildlife sanctuary. The animals know how to stay away from the open and busy roads that crisscross the territory. And there are no forests here, only farmland.

The shrine is essentially a tight-knit community of nearly a dozen densely populated villages where hundreds of rare blackbucks fearlessly roam the fields amid the hustle and bustle of busy life. The forestry department does not own any land in this region and yet there is a thriving wildlife reserve, home to thousands of wild animals.

The shrine, which starts from the Punjabi village of Bazidpur Bhoma, is also home to over 30,000 people from the Bishnoi community. The Bishnois are a Hindu sect founded at the end of the 15th century in Rajasthan and are well known for their fierce love for the environment and all that lives.

The Bishnois here in Abohar have consolidated this heritage over the past century by allowing their private lands to moonlight as a special reserve for the protection of the Krishna (blackbuck) and the Chinkara deer (Indian gazelle).

The person credited for founding the sanctuary is Chaudhary Sant Kumar Bishnoi from the village of Dotaranwali, born in 1915. Sant Kumar grew up in the tradition of preserving wildlife; his father and grandfather persisted in their patrols to chase poachers out of the area. Sant Kumar was more radical and started fining poachers and handing them over to the police. He mobilized residents of surrounding villages to become more proactive in protecting deer, eventually forming the All India Wildlife Defense Bishnoi Committee (AIWDBC).

At the request of the Bishnois, the government of Punjab issued a notification in 1975, declaring the villages of Raipura, Dotaranwali, Rajwali, Sardarpura, Khairpura, Sukhchain, Seetoguno, Maharana, Himmatpura, Rampura, Narainpura, Bishanpura and Bazctidpur Bhoma as Sanctuary Abohar fauna. Sant Kumar received the Indira Gandhi Environmental Prize in 1992 and died six years later. In 2000, the 13 villages were legally declared sanctuaries under the Wildlife Protection Act, 1972.

Ashok Bishnoi, Chaudhary Sant Kumar’s grandson and a retired forestry officer, is now the national vice president of the AIWDC. He told 101Reporters: “Thousands of people in the Bishnoi community are involved in the protection of wildlife. They guard these creatures day and night. As a result, this is the only area in Punjab where there are now blackbucks. “

The Bishnois are zealous in their mission to protect wildlife and manage the sanctuary with the support of the forestry department. The Forestry Department has deployed 11 staff to the sanctuary and, with 10 daily paid contract workers, they oversee the vast reserve spanning 46,513 acres.

But the real obstacle for hunters and poachers is the Bishnois who number in the thousands. The other communities living here, although few in number, have assimilated into the Bishnoi way of life and are equally committed to the cause. RD Bishnoi, head of the Punjab branch of the AIWDBC, said many times unarmed Bishnois have caught armed poachers and handed them over to the police. When wildlife is in perceptible danger, even women prey on hunters on their own, he said.

Anita Rani, Acting Rangeland Manager, Punjab Forest and Wildlife Protection Department, blames the Bishnoi community for the lack of poaching in the area for several years now. “The people of the Bishnoi community saved these innocent creatures. They are always ready to protect them from poachers and provide first aid in case of injury,” she told 101Reporters.

For 26 years, Rajendra Bishnoi has guarded the shrine. He said, “The forest service and the villagers are working day and night. We do not have fixed working hours. As soon as there is information about the injury of a wild animal, we immediately arrive on site. is treated on site and released. If it is serious, he is taken to the rescue center for treatment. Several times we even took injured animals to Ludhiana.

Besides the blackbuck, other animals such as nilgais, pheasants, hares, jackals, feral cats, porcupines, wild boars and black ducks are also found in abundance. The community here is working to arrange food and water for the animals at different locations in the fields.

From birth to death, Bishnois feed the wildlife around them as if they were part of a large family. RD Bishnoi said the community performs the last rites of animals killed in accidents. Sometimes after the death of a female deer, villagers are known to bottle-feed newborn calves.

“Visitors come here in large numbers and find inspiration to protect nature,” said Kuldeep, the warden of Shaheed Mata Amrita Devi Bishnoi Park which was inaugurated last year by the Chief Minister of Punjab, Captain Amarinder Singh. The state government spent 10 crore rupees to build this memorial in the village of Maharana to honor the sacrifice of 363 Bishnois in Jodhpur three centuries ago, who sacrificed their lives to protest the logging by the king for his new palace.

In the shadow of this memorial, the Bishnois continue to cement their heritage.

The sanctuary also has its share of challenges and recent development has left the people of Bishnese between a rock and a hard place. Stray dog ​​attacks on deer are increasing. Additionally, the cobra barbed wire that was installed around fields to protect crops from stray animals caused fatal injuries to deer during dog attacks. RD Bishnoi said: “When we raised our concerns, the administration banned cobra thread. So far, most cobra threads have been removed. But dogs are still a threat because of their numbers. increasing exponentially. These dogs attack deer whenever they in the past two years, about three dozen deer have died in dog attacks. Many Nilgans have also been killed by dogs. “

With the last wildlife census taken in the area ten years ago, there are no recent figures to convey the gravity of the situation and, in fact, views are contradictory. According to Rani, when the 2011 census found around four thousand deer in the sanctuary. She believes that this number has not decreased because the Bishnois have always protected them. But RD Bishnoi said deer numbers have declined due to dog attacks. Rani promises a new census soon. “We had sent a proposal to the Wildlife Institute of India Dehradun in this regard, which they accepted,” she said.

Ashok Bishnoi sees the increasing number of stray dogs as a major threat to the sanctuary. “For us all living things are equal. We cannot protect deer at the cost of hurting or torturing dogs. The administration should find a safe and quick solution to the stray dog ​​problem,” he said. declared, stressing the powerlessness of the Bishnois in handling dog attacks.

Forestry department officials have raised the issue with the district administration, which is considering a sterilization campaign for stray dogs. But in the meantime, the number of blackbucks and dead Nilgans is piling up, according to locals.

(The author is a Hanumangarh-based freelance journalist and a member of 101Reporters.com, a pan-Indian network of local journalists)

Legal warning: MENAFN provides the information “as is” without warranty of any kind. We do not accept any responsibility for the accuracy, content, images, videos, licenses, completeness, legality or reliability of the information contained in this article. If you have any complaints or copyright issues related to this item, please contact the supplier above.

SC to hear the appeal of the government of Rajasthan. on the Nahargarh wildlife reserve

Assam’s Barak Valley may soon have its second wildlife sanctuary