As he travels through some of the most northerly places on Earth, Roie Galitz rushes to capture endangered landscapes and the animals that call them home, in an effort to make their plight real for people around the world.

Galitz is an award-winning Israeli wildlife photographer and Greenpeace Ambassador. Ahead of the COP 26 Climate Conference which begins in Glasgow, Scotland on October 31, and where UN Secretary General António Guterres will seek to get world leaders to take more ambitious steps to reducing emissions from global warming, Galitz spoke about his work on The Times of Israel’s weekly podcast, The times will tell (edited clips appear below) and shared some of her favorite images.

“As an Israeli, based in Tel Aviv, I am drawn to things that are the most different from me,” he says. “I like to go as far as possible. I would love to go to Mars, but since we can’t go there yet, I like to go to the colder places.

Among his favorite places are Svalbard, a Norwegian archipelago in the Arctic Ocean, Antarctica and the Kamchatka Peninsula in the Russian Far East.

“I love the ability to tell stories,” he says. “With photography I can take people on my adventures all over the world. I can take a slice of something that I am the only witness to and keep it forever, freezing a fleeting moment for eternity. 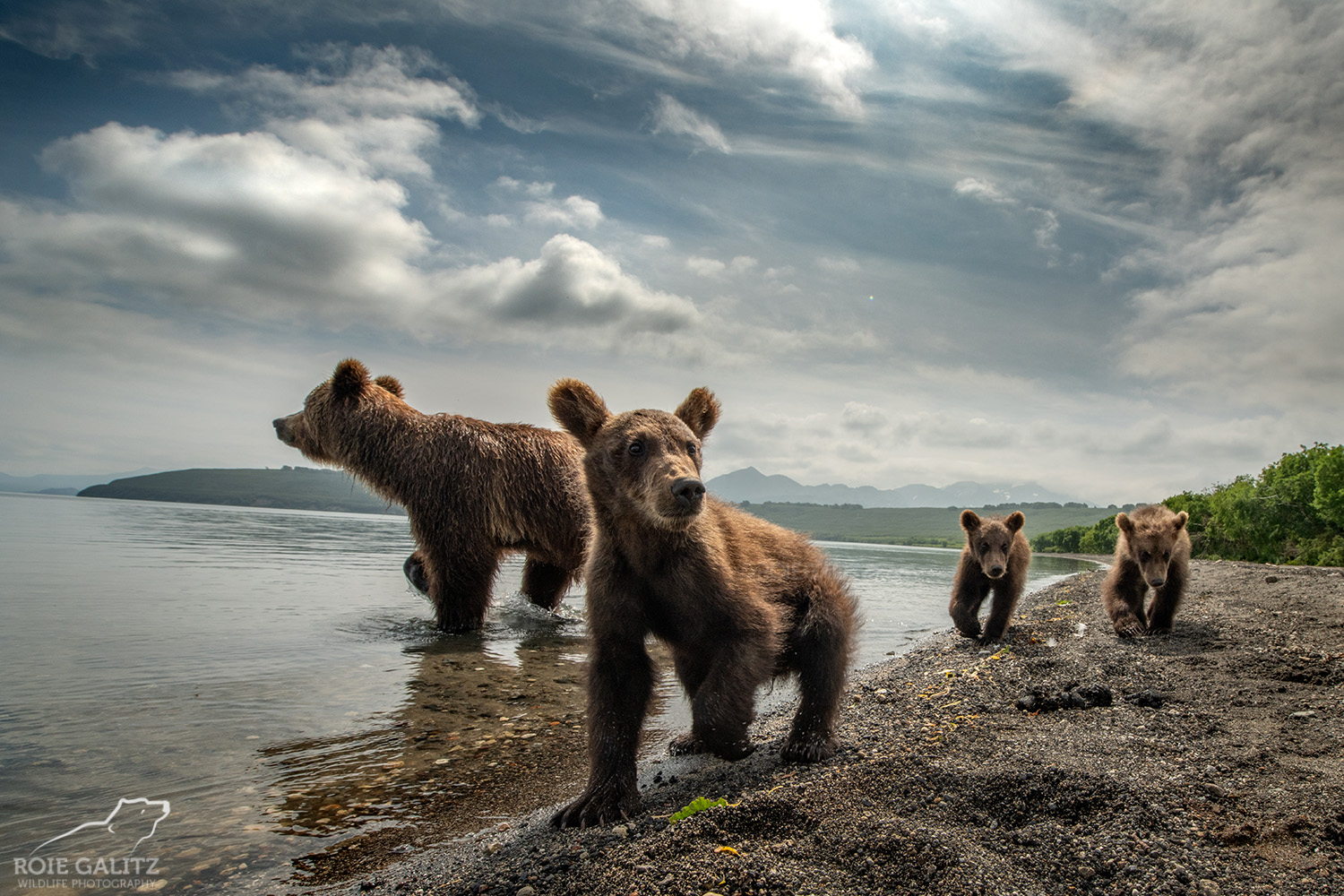 Foraging: A female Kamchatka brown bear searches for fish to feed her young in the southern Kamchatka Peninsula in the Russian Far East, August 2018 (Roie Galitz)

Galitz’s travels in colder climates have seen him face some of the more extreme effects of climate change, as the effects of global warming are seen more quickly at the North and South Poles.

“That’s what brought me to environmental diplomacy,” he says. Before such journeys began, he would hear about the climate crisis on the news like everyone else, but saw it as something distant and not of personal interest.

“When you go to these places, year after year, you see the immense changes that are taking place.”

White ice reflects more energy from the sun back into space than dark earth and water, he explains. Without sea ice, Earth will absorb more solar radiation, warming the planet even more.

“Over there you see the glaciers melting, the polar bears starving, an ice-free Arctic, the Northeast Passage opening.” The passage is a sea route between the Pacific and Atlantic Oceans, along the Arctic coasts of Norway and Russia. 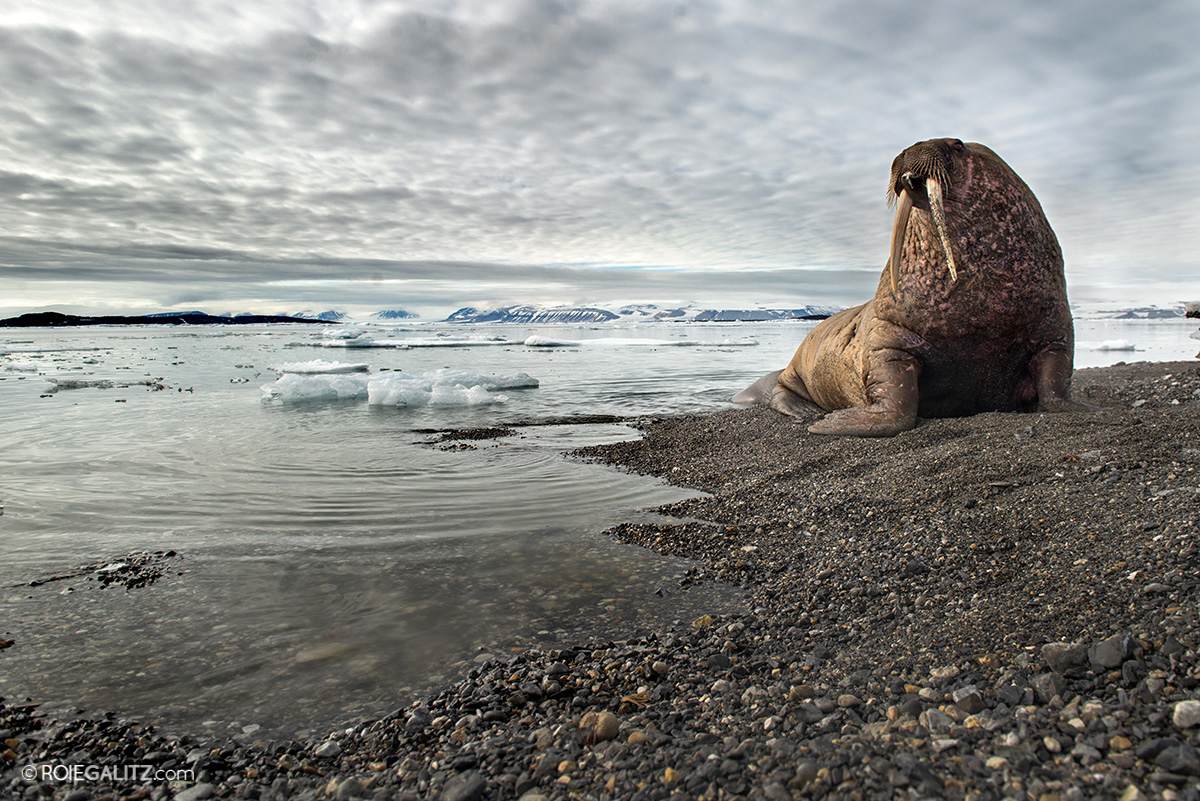 ‘King of the Beach’ shows a large male walrus guarding his harem in the Svalbard Fjord. (Roie Galitz)

Some of Galitz’s photographs deal directly with the effects of climate change.

But more often than not, it zooms in on the daily life of its subjects, showing them playing, feeding and mating. 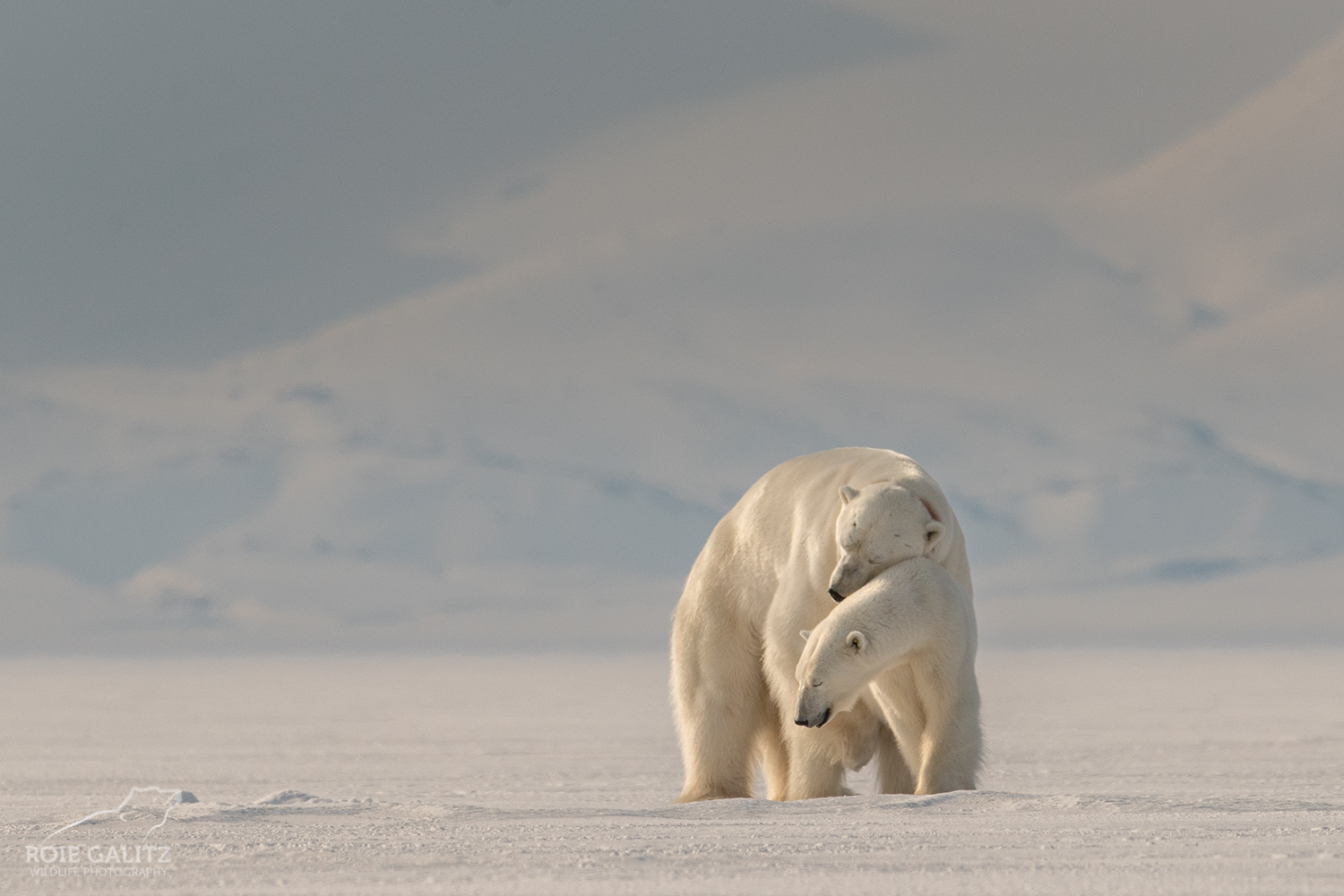 “It’s one thing to photograph depressing things, but I try to humanize the animals, to make them easier to understand, pleasant and lovable,” he says. “When people care about something and it’s taken away from them, they usually care more about something. “ 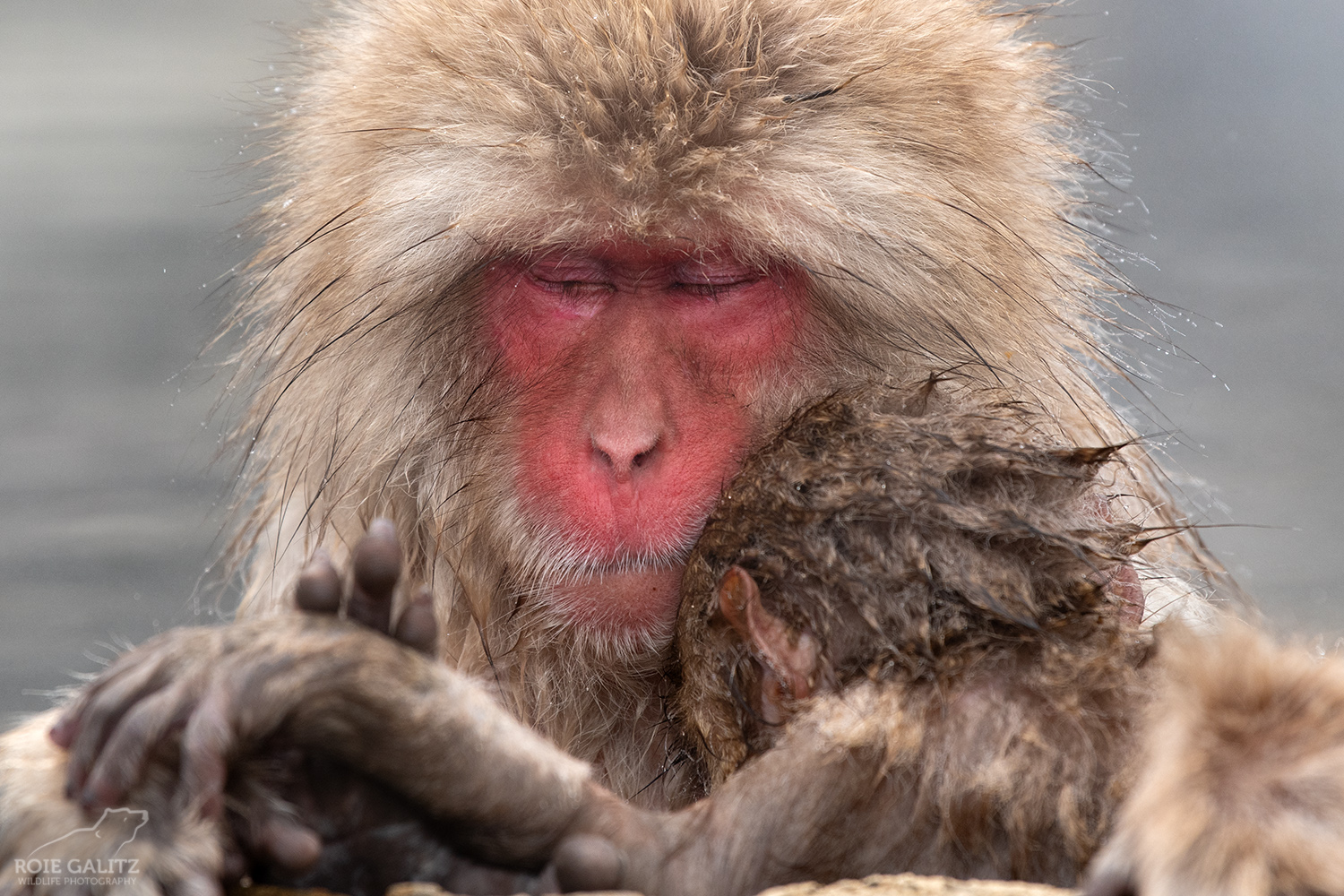 In “Maternity”, a Japanese snow monkey and her baby relax in the hot and thermal pools of Jigokudani in Nagano, Japan in February 2019. (Roie Galitz) 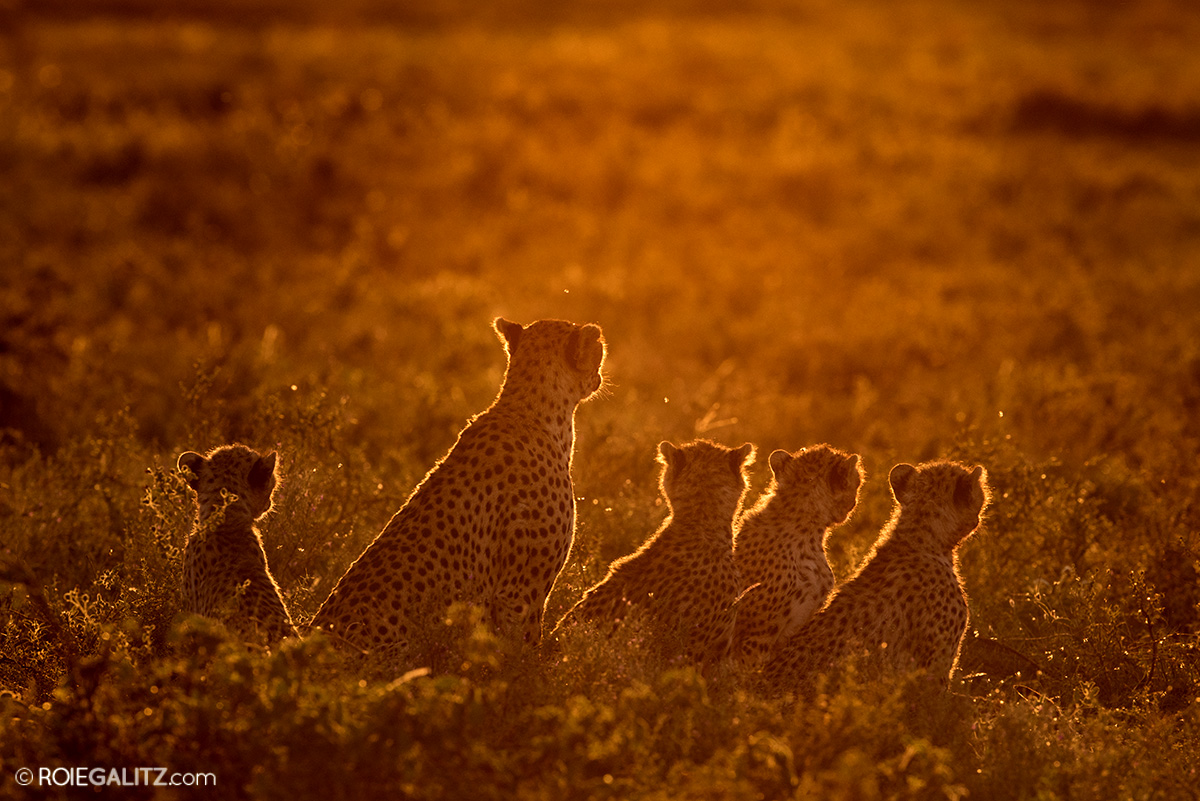 In “Serengeti Sunset”, a female cheetah and her four cubs watch the sun set in the southern Serengeti, Tanzania, in March 2017. (Roie Galitz)

In the explanations of his photos and the numerous lectures he gives, including one at a TED convention in Glasgow two years ago, Galitz links his images to the effect of humanity’s actions on what he calls it the “relay race of life”, during which all living things strive to pass the “genetic relay” from one generation to the next, to keep the species alive.

One of his photographs, representing a young lioness eating the corpse of an old female elephant who died of natural causes, symbolizes for him the endless cycle of life. Earlier this month, it earned him a commendation at the prestigious Wildlife Photographer of the Year Awards at the Natural History Museum in London. 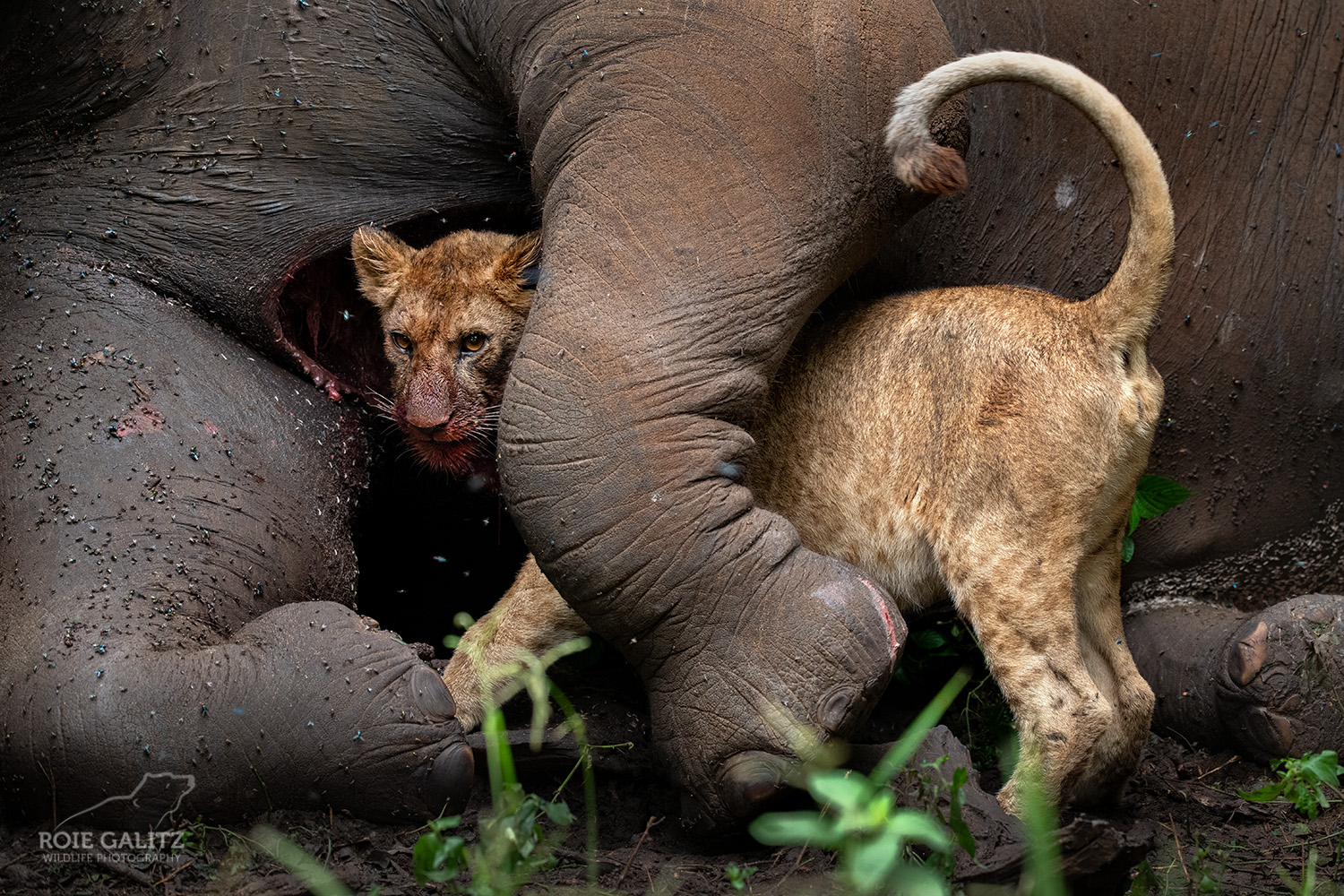 ‘Last Embrace’, highly recommended by the judges of Wildlife Photography of the Year 2021, at the Natural History Museum in London. A young lioness will gain strength by eating the remains of an old female elephant that died of natural causes, Tarangire National Park, Tanzania, March 2019 (Roie Galitz)

Galitz is particularly fond of bears, which he says are super intelligent, as well as all large mammals, many of which are advanced predators.

“We’ve seen all over the world that when you remove apex predators or any key species from the environment, the whole ecosystem can collapse.” 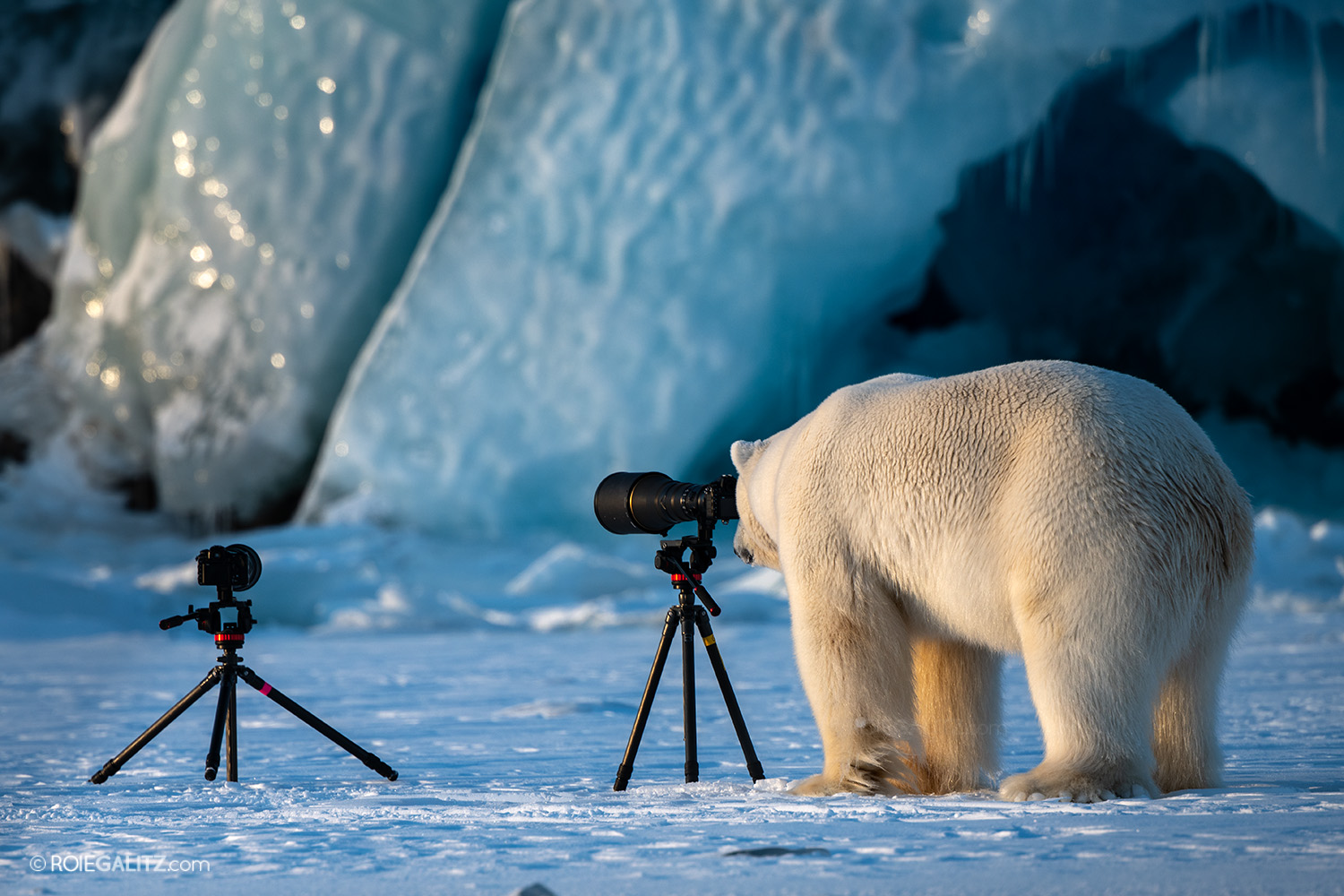 “Photograbear,” taken in Svalbard in the summer of 2018, shows a large male polar bear chasing Galitz so he can pick up a peak through the lens. (Roie Galitz)

When asked why people should care about the extinction of polar bears thousands of miles away, he replies that they are top predators and key species – creatures that help define an entire ecosystem – and that if they are removed, the entire chain of life is affected. Countries like Iceland and the UK will feel the impact, he says, because with more seals in the oceans, there will be fewer fish.

Globally, he says, polar bears are like “the canary in our coal mine,” warning us of the many consequences of massive melting ice, such as sea level rise, which will endangered millions of people around the world. 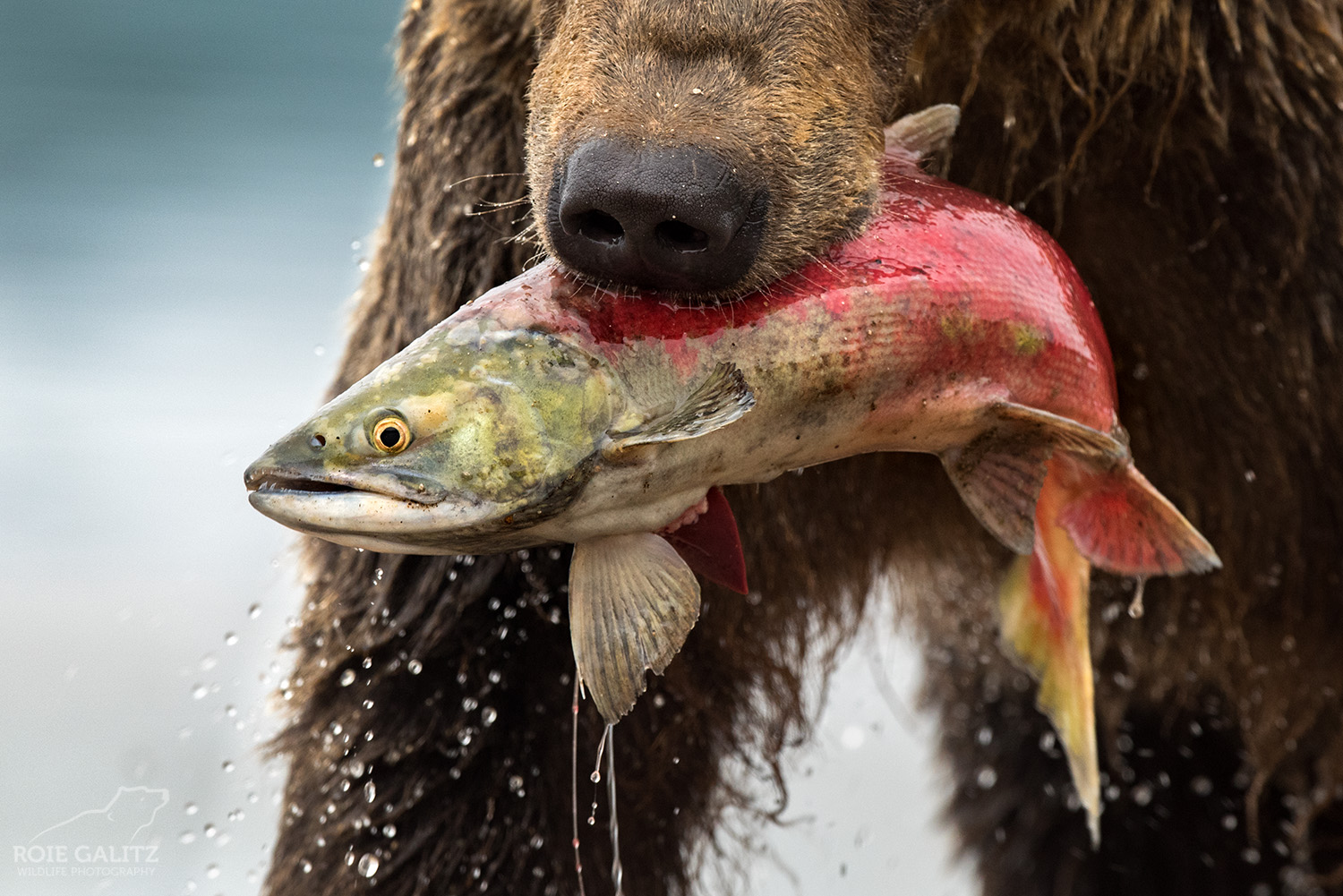 Galitz says that if he wasn’t optimistic about the possibility of bringing the crisis under control, he wouldn’t do what he is doing.

“There is a lot we can do about it. We just try, like we did with the [COVID-19] pandemic, to flatten the curve. We hope that future generations will know how to repair our damage better than we do. “ 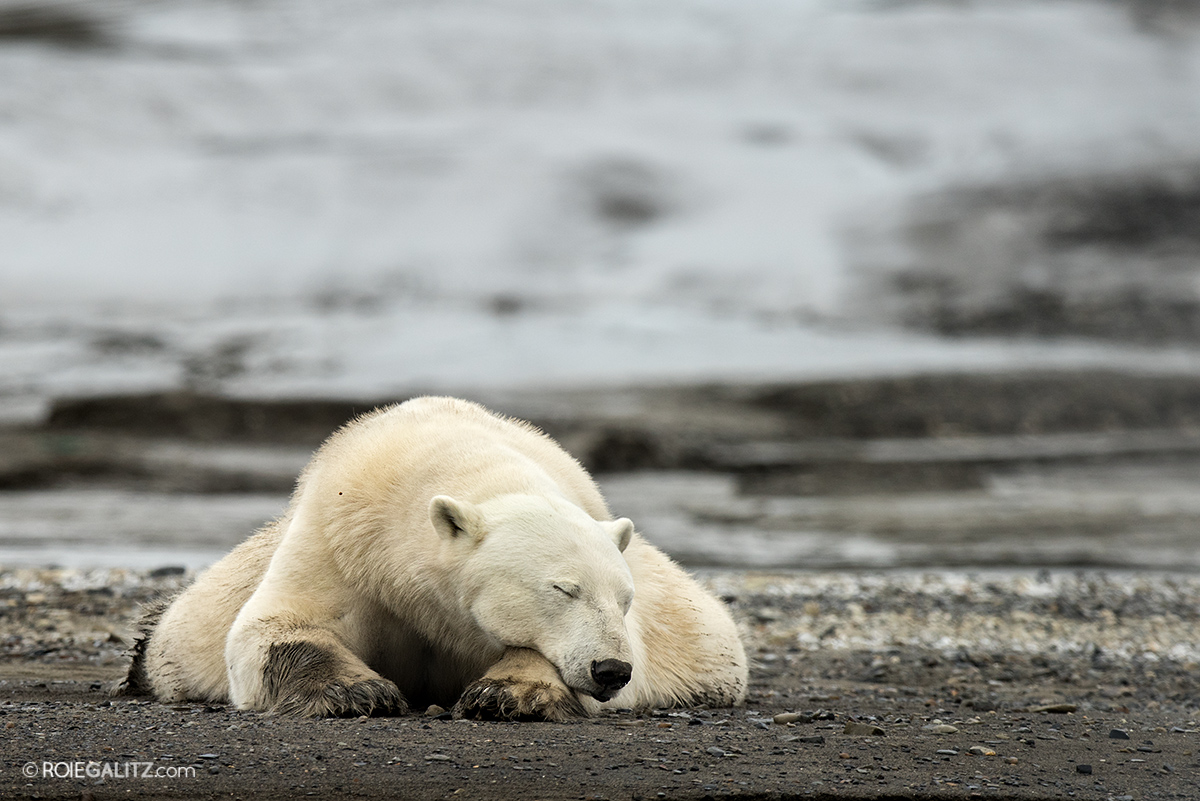 ‘Summer rest’ in Svalbard, during the particularly hot summer of 2017, when polar bears rested as much as possible to conserve energy until the ice returned. (Roie Galitz) 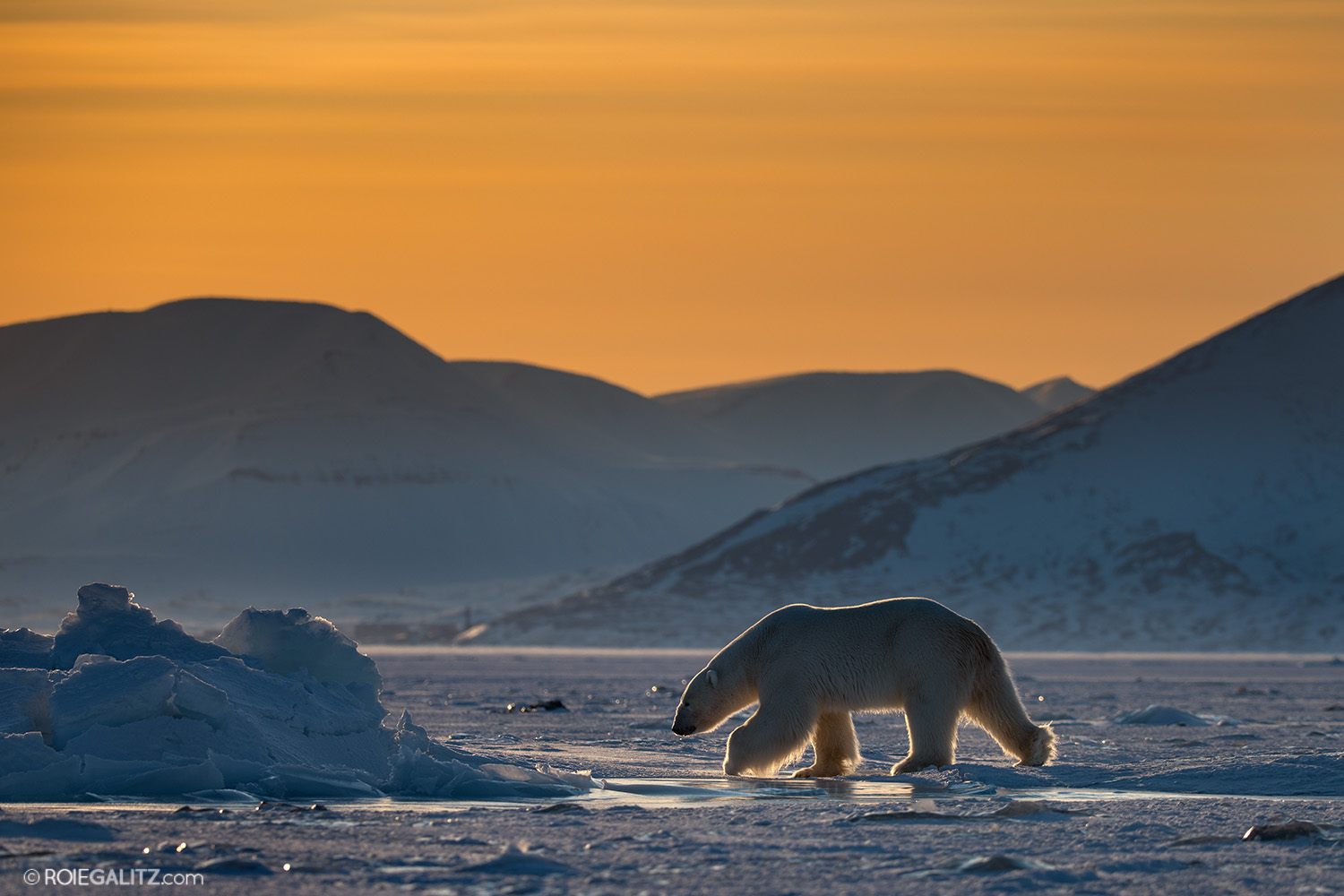 ‘Polar Night’ features the large male polar bear who peered through the lens of Galitz’s camera (above) walking through a frozen fjord in Svalbard around midnight looking for seal breathing holes, summer 2018 (Roie Galitz)

Wildlife (Protection) Amendment Bill, 2021; Filling the gaps in wildlife protection is the need of the hour

AFRICA: China commits to the protection of wildlife

Bill in Lok Sabha calls for changes to wildlife law

From hunters to rangers: fighting for the protection of wildlife